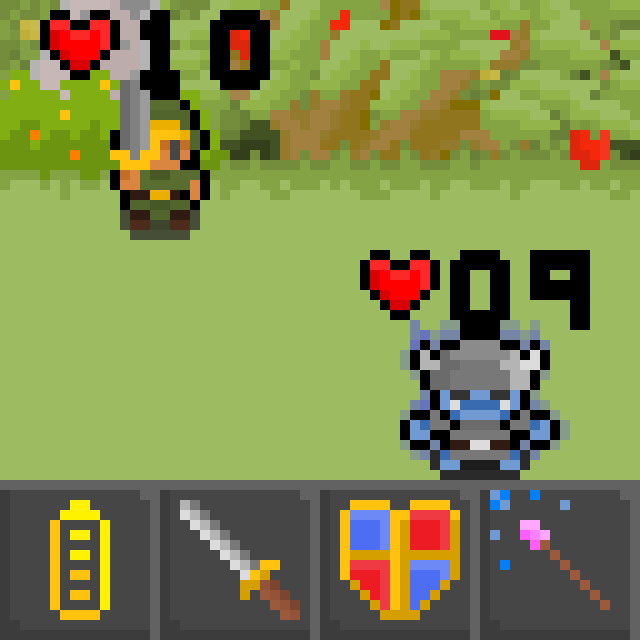 Mini-Match is a game based on prediction and strategy. Play as one of four champions and test your skills against those same four champions in a battle.

You have to deiced which quadrant you want to go on the offensive, store up power, play defensively.

Each champion has the same basic game play, but their spells are what make them unique in their game play. Some spells can be used for attacking the enemy, some for healing lost health, some for buffing yourself, and for inflicting status ailments.

Give this game a try today, and please make sure to read the included manual.

Energy will allow you to use magic.
Charging increases the amount of energy you have by one.
You can have a maximum of four charges, denoted by the tally of bars in the charge icon.

Attack will make you fight your opponent if you both move to the same quadrant.
You will also damage them if you clash with them.
A clash occurs when both you and the opponent intersect each other while moving to your target locations.
Damage will be equal to the attacker’s strength, which at the start is one.
That damage is removed from the opponent’s health points.
However, if the opponent defends themselves, they will take no damage from the fight or clash.

Defending will allow you to negate all damage and/or from being afflicted with a status.
Defending will take up a “defense uses”.
If you have no defense uses, then you will be unable to defend.

The amount of defense uses you have are denoted by the number of colored quadrants in the defense icon.

Magic has a variety of uses and will vary from champion to champion.
Select the magic icon and then you may select the spell you wish to use.
The energy cost of the magic is denoted by a tally mark overlay on the spells.
Green/Teal icons are spells that will influence the user.
Purple/Magenta Icons are spells that influence the opponent, if they make contact.
If the spell is a purple/magenta icon you will be prompted with a magic target selection.
You will then select the quadrant you wish the spell to move towards.
If your spell would target the quadrant you are occupying, after a fight, the spell will instead move towards the intended movement target.

You can right click to return to the action screen before selecting your quadrant.

Power Attack: Your champions strength will increase by one for one turn.
You will damage the enemy by two instead of the usual one damage if you attack the next turn while fighting or clashing with them.

When a champion is burned, they will take double damage, when damage through a fight, clash or damaging spell.
Burn status lasts from one to three turns.
You cannot have multiple status ailments at once.

Heal: Recovers one of the users hit points.

Bolt: Does three damage to the opponent, on contact.

Blast: Does three damage to the opponent, on contact.

When a champion is poisoned, at the end of each turn they will take one damage.
Poison status lasts from one to three turns.
You cannot have multiple status ailments at once.

Does one damage to the opponent, on contact.
When a champion is frozen, they are unable to move from their current location.
Frozen status lasts from one to three turns.
You cannot have multiple status ailments at once.

Wind Razor: Does one damage to the opponent. 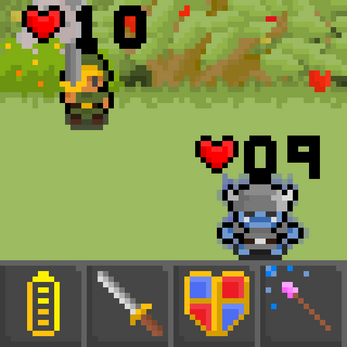